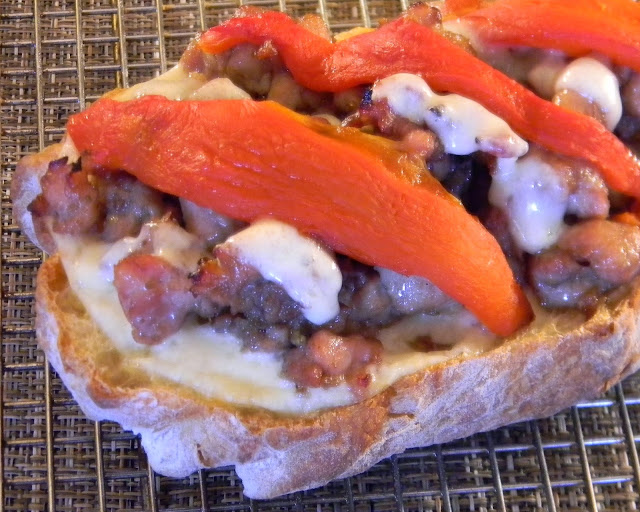 The other night a couple of pals showed up unexpectedly to watch the hockey game. Personally, I think they came over more because they were hungry, rather than to watch our team get creamed that particular night. But because I am a good homegater, I was prepared for this little last-minute surprise so I got right to work before those 2 started eating my livingroom furniture.

I decided to whip up a little Chicken Sausage Bread which consists of sauteed chicken sausage, provolone cheese, onions, garlic, red wine and roasted peppers on top of Whole Foods sperlonga bread. The chicken sausage was previously sauteed and frozen (I had leftovers from another dish) so I just needed to nuke it a little to defrost it. I also had the bread in the freezer so I popped that in the oven and got that defrosting as well. Once everything was defrosted (which took about 10 minutes), I layered the provolone on top of the bread, followed by the sausage, roasted peppers and a little more provolone. The guys Hoover-ed it down (I think one of them might have downed a napkin during their feeding frenzy). It was a hit.

Having things on hand in the freezer takes the angst out of unexpected company. You can always prepare ingredients and fillings ahead of time and freeze them until you need them. That way you're not wigging out if someone shows up unannounced or if more people than you were anticipating show up on gameday. That way your day/evening is freakout-free. 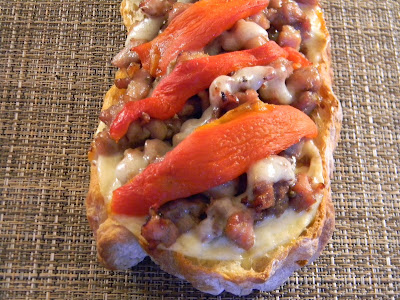 1.  Pre-heat the oven to 450-degrees. In a medium-sized saute pan on medium heat, heat the oil and add the onions and garlic. Saute until translucent. Add the sausage meat and saute, breaking the meat up into small pieces as it cooks.

2.  When the sausage is cooked through (about 10 minutes), add the red wine and continue sauteeing until the wine is absorbed (about 5 minutes). Remove from the heat and let it cool down slightly.

3.  Cut the bread in half length-wise and place slices of the provolone on top of the bread. You can add as much cheese as you like. Since my cheese was sliced relatively thick, I made one layer.

4.  Sprinkle the sausage on top of the layer of cheese, until most of the surface is covered.

5.  Place slices of roasted peppers and thin strips of provolone on top of the sausage.

6.  Place the sausage bread on a sheet pan and place in the oven. Heat through until the cheese melts and slightly browns around the edges.

There you have it. It doesn't take much to whip up and will get rave reviews when you serve it.
See you again next week! 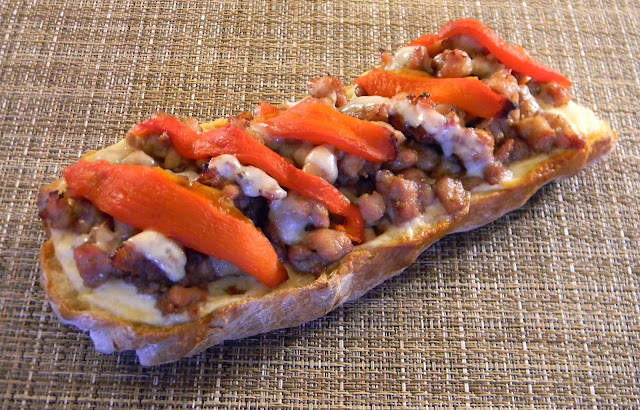