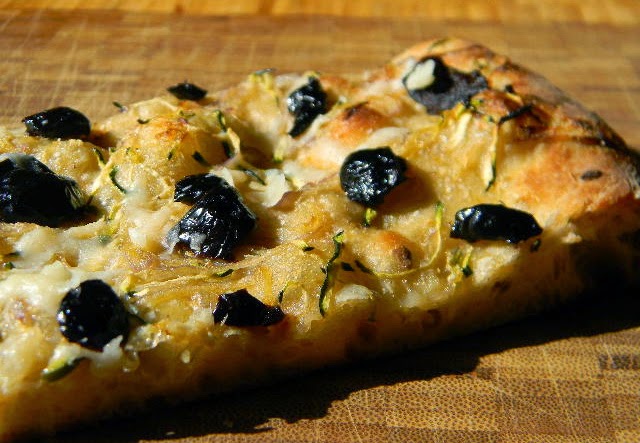 My bracket's already dead and buried. It went down in flames. Someone must have put a curse on it, that's all I can say. For some reason I had a feeling I wasn't going to go far this year. Ever get that feeling? Oh well, what can you do? But even though I'm out of the bracket running, I'm still in the mix with entertaining the gang.  I still have pals coming over to catch the action and of course they come hungry.  I wanted to make something quick, light and satisfying, so I whipped up: Zucchini-Onion Flatbread!

A flatbread makes for a good munchie because it's not overly heavied-up with ingredients. This one consists of just red onions, zucchini, oil-cured olives, a little olive oil and balsamic vinegar on top of a multi-grain crust. When it comes out of the oven, I immediately hit it with some grated parmesan just for a little extra flavor, but not enough to be immediately obvious.

1.  Pre-heat oven to 550-degrees. Roll out dough and place on a sheetpan with parchment. Try to stretch it out to the edges of the sheetpan if you can.

2.  Mix the remaining ingredients (except for the parmesan cheese) in a bowl and evenly spread on top of the dough. Rearrange the olives to evenly distribute over the flatbread.

3.  Place the sheetpan in the oven and begin watching it after 3 minutes. At such a high temperature, this is going to cook fast. You may need to turn the sheet around half-way through so that it browns evenly.

4.  When the crust is golden, remove from the oven and sprinkle a very light coating of parmesan cheese over it.

5.  Let cool, slice and serve to the hungry masses.

NOTE:  This can also be served at room temperature, so it can be made ahead and held until your guests arrive.

And there you have it! Hope you feel inspired to try this for your next March Madness homegate! And speaking of, don't forget to keep homegating!! 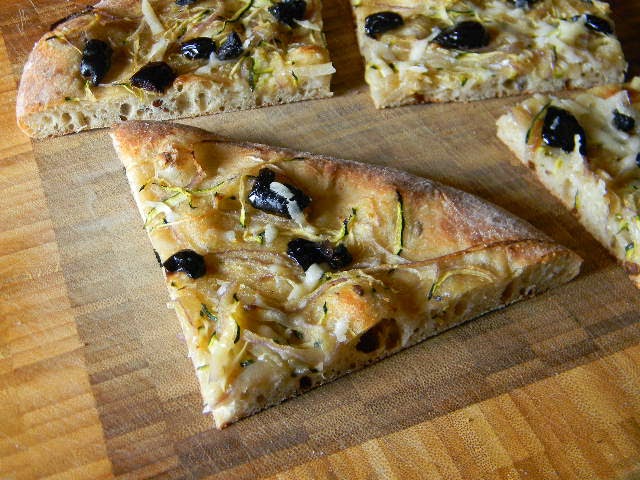