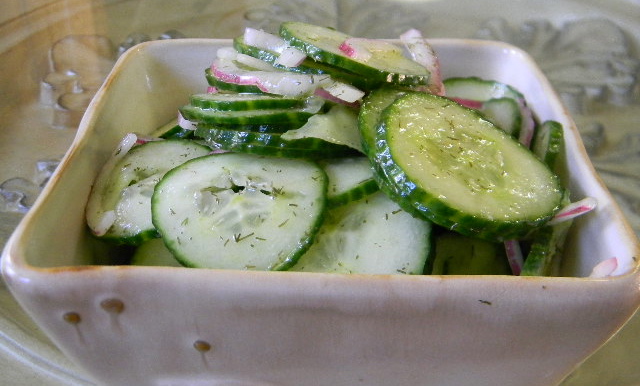 So now that the NBA and the NHL have crowned their champions, our attention is now focused on the Women's World Cup. USA! USA! It's been an interesting couple of matches so far. Think we might go all the way? We shall see. All I know is that watching the world's futbol makes for some hungry guests. In keeping with my light theme as of late, I decided to make another tasty side dish: Cuke Salad.

Everybody has a cuke salad recipe. Everybody's grandma has a recipe for cuke salad. The whole world has a recipe for cuke salad - and each one is as individual as the person who makes it. That's why I always enjoy it because each one is a little different. I'm not sure where my recipe comes from, but I've been making it for forever. It's very simple to prepare and makes a really refreshing dish. I've even eaten it as a main dish! I like using English cucumbers because I feel they have a better crunch to them, but you can go with whatever cukes you like. After that, you just have red onions, garlic powder, dill, white pepper, olive oil and white vinegar. Cuke Salad
(serves 4 as a side dish)

Toss all the ingredients in a large mixing bowl and let sit for 1 hour to let the flavors develop. Serve as a side dish or as a main.

And there you have it! Just another light dish that goes great with either sandwiches or something grilled on the bbq. Either way, you'll enjoy this one!

Until next week, keep on homegating! 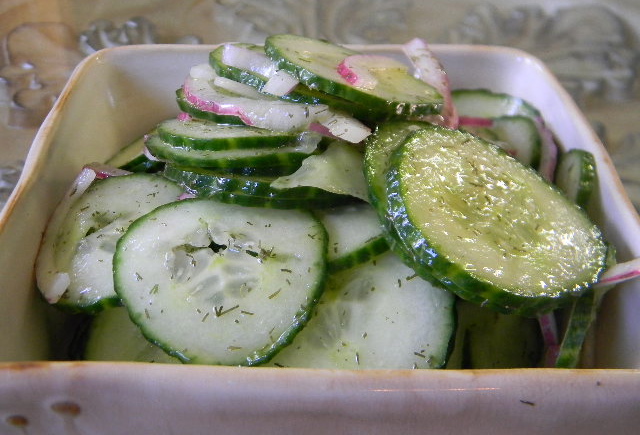