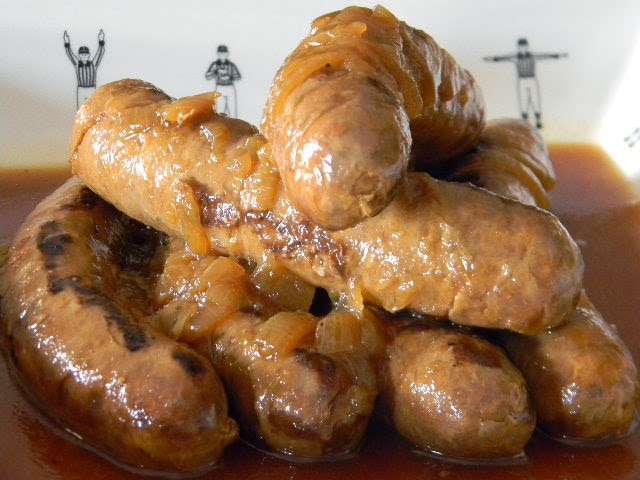 This past Sunday some of the gang came over to catch the NFC & AFC Championship games. Occasionally I like to prepare a dish that has a culinary connection with one of the teams playing and so I went with Beer Brats because the Green Bay Packers were one of the teams playing (bratwursts are a staple at Packer games). While unfortunately that might have put the whammy on those poor guys, the brats themselves were a winner.

Beer Brats are easy to make and don't take very long. Just grill the brats, then prep the beer and onion sauce. Merge the 2 and you have a really nice dish. Keep them warm in a slow cooker and people can help themselves throughout the day. They can be enjoyed as is or in a hogie roll. You can also serve them with a few condiments:  hot sauce, ketchup, mustard, relish and/or cole slaw (or anything else you can come up with). 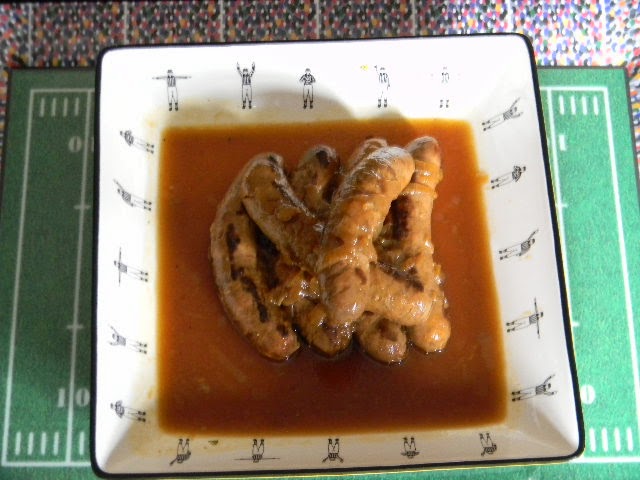 1.  Grill brats on all sides and let sit.

2.  Heat the 2 tbs of canola oil and saute the onions until translucent. Salt and pepper to taste.

4.  Return the brats to the sauce and bring back to a low simmer.

5.  At this point you can place the brats and sauce in a slow cooker and keep on low.

6.  Serve as is or on a hogie roll with mustard, hot sauce, relish or any other condiment you like!

Hope your try these Brats. As a matter of fact, they'd be perfect to serve on Super Bowl.

And speaking of Super Bowl, read below for Part 1 of tips and tricks for a successful Big Game Party... 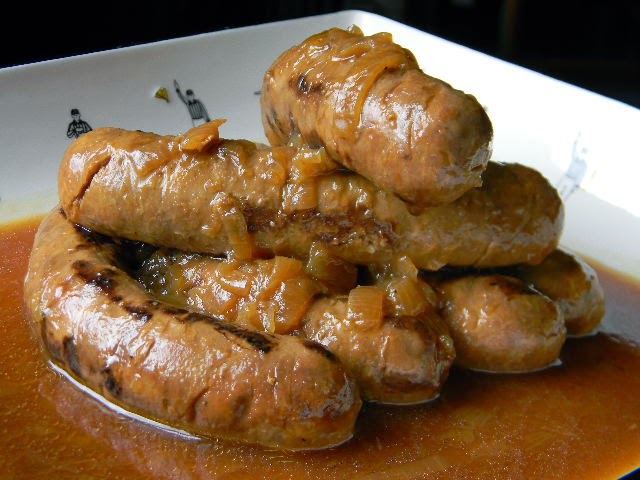 The Seattle Seahawks and the New England Patriots are meeting in the Super Bowl on February 1. For me, this begins a 2-week period of party preparations. While the hardcores come by every Sunday to watch the games, the number of people coming to Homegating Headquarters for the Big Game almost doubles. Hey, whether you're a football fan or not, there's something about going to a Super Bowl party that no one wants to miss out on.

During this time I develop my menu, begin shopping and start cooking/freezing dishes so that I don't have a lot to do on the weekend of the party. By that time, all I have to do is defrost whatever's frozen that Saturday and reheat them on Sunday.  I want to be as prepared ahead of time as possible so that I'm not stressed out for the party. I want to enjoy the party as much as my guests.

This is the time when I usually start inviting people. I used to send out invites that I'd either make or buy, but I've been having these parties for so many years that I've reached a point where I don't have to do that. People actually contact me confirming what time the festivities begin! But this is a good time to start reaching out to people because this will determine how much food needs to be bought/prepared.

I make the menu as simple as possible. I don't stress myself out by making TONS of food and then wind up with enough leftovers to feed a third world country. I used to do that in the past and my coworkers loved me for it the next day.  But now I make foods that are easy to prepare and easy to serve. I use hot buffet trays and ice trays. That way I'm not running back and forth to the oven or fridge and missing out on the game itself. The food will stay hot or cold and people can help themselves when they want to.

I start perusing the supermarket circulars for Big Game sales. All the stores are going to be running them now. I'll start picking up chips, soda, beer and paper goods ahead of time so that I don't overload myself a day or 2 before the party. I don't want to wind up schlepping bags and bags of groceries into my house at one time. I also don't wait until the last-minute to shop because then I'm stuck competing with the other procrastinators who waited until the last minute and are panic shopping as if a 10ft blizzard were on the way (believe me, I've experienced it). This is also the time that I start checking out the party stores for fun decorations and accoutrements. I try to get as much done ahead as I can. I make a grocery list and and a "To-Do" list and I keep checking them off. Organization is key. It prevents a lot of freakouts in the end.

So those are a few tips on how to prepare in the days leading up to the party. Next week I will provide tips on what to do the day of the party. We will also be revisiting some of the dishes that were posted during the NFL season to hopefully provide you with some menu ideas for your party.

See you next week!